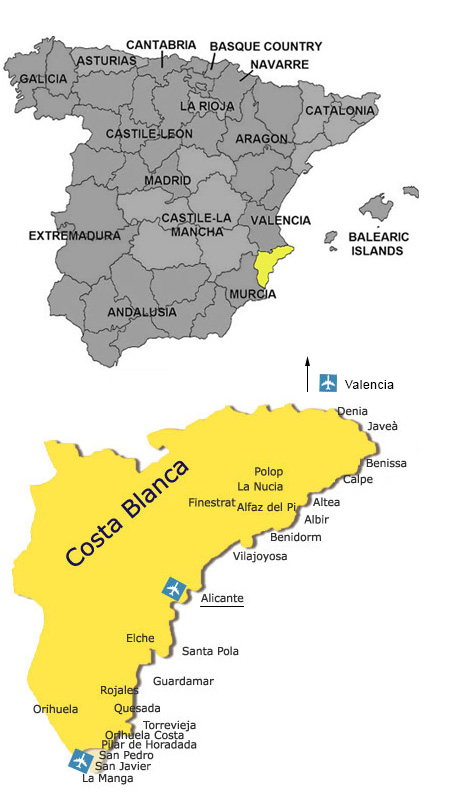 Why choose the Costa Blanca

The Costa Blanca is a coastal region of the province of Alicante about 240 km long. It extends from Dénia in the north to Torrevieja in the the south and includes more than 218 km of coastline with numerous sandy beaches.

The annual average temperature is 18 ° C. Its climate is recognized by the WHO as one of the best in Europe and in the world.

It is made up of agglomerations like Alicante, Benidorm, Calpe or Torrevieja, typical towns and villages. The Costa Blanca also has many protected natural parks, 22 golf courses and 25 nautical clubs. Thanks to its diversity, the Costa Blanca offers the possibility of residing in urban or residential areas, closed to the sea, in the plain, in the countryside or on the surrounding hills.

The railway network and the bus services make it possible to connect the towns of the Costa Blanca with each other. The motorway of the Mediterranean which goes along the Costa Blanca connects the north from the French border to the south of Spain.

From Denia or Alicante, it is also possible to reach Ibiza by ferry in less than an hour, Palma de Mallorca or North Africa.

The Costa Blanca boasts a very high quality of life thanks in particular to a competent and inexpensive healthcare system, a much lower cost of living than in UK, Germany, Belgium or France, a high level of security and political stability. Benefiting from all the essential modern infrastructures, Spain offers an easy integration thanks to its quality of the welcome and its culture.

Process to purchase a property

Do you want to sell your Property?